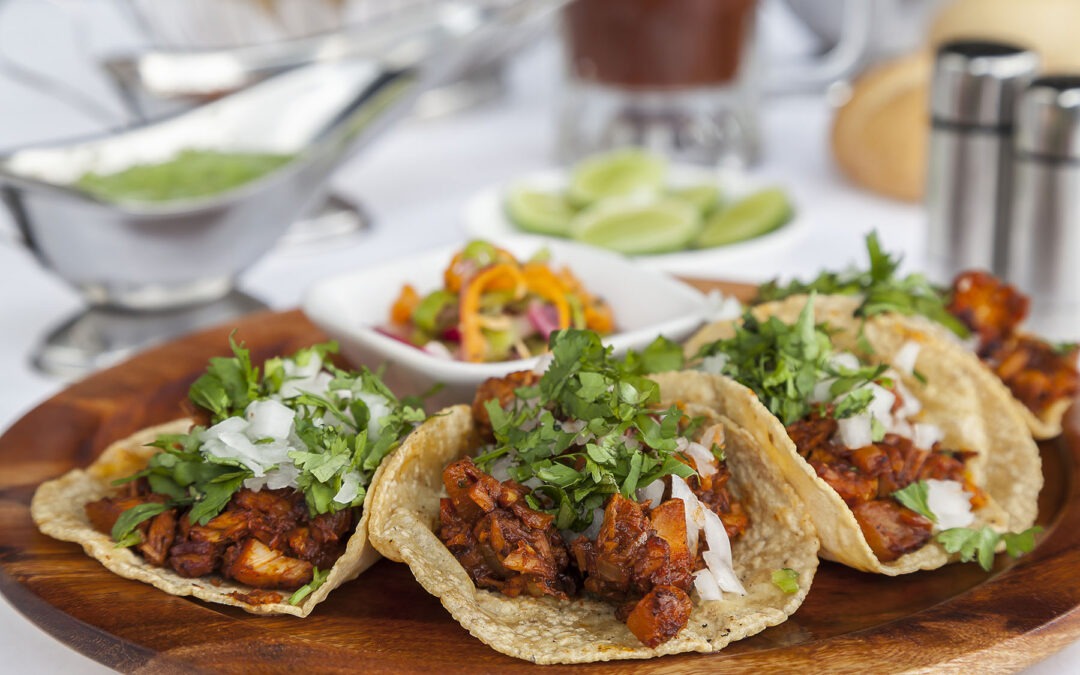 Every cuisine has its own history. Mexican cuisine can be traced back to 7000 BC, when hunter-gatherer indigenous people lived in present-day Mexico. The most common plants were chili pepper and corn. Corn was treated with lye to make it soft for grinding, which helped with making tortillas and other corn based breads. These people did not eat much protein, as meat was scarce in the area, and so they ate a variety of beans, which served as a side of most meals with corn.

When Spanish people arrived in Mexico, they introduced many of their foods to the indigenous people, like rice, olive oil, garlic, coriander, cinnamon, and many other spices. They brought many domesticated animals like pigs, cows, chicken and goats as a source of protein, and some of these animals were used for dairy as well, with cheese becoming a main ingredient in many dishes.

The Mexican foods we may be familiar with are based on beans, corn, tortillas, chili peppers, avocados and tomatoes and served with some kind of meat and cheese. Mexican food has become very popular in the US and globally, and it is because of the different flavors. Unfortunately, many entrees may be made with oil, lard and salt and topped with cheese and sour cream. One can get a day’s worth of calories, saturated fat and sodium in one meal.

As with any cuisine, there are unhealthy elements to Mexican cuisine, however Mexican cooking originally used a wide variety of ancient grains like quinoa, chia, beans, corn and chili peppers which are high in fiber, vitamin C and help with satiety. Tortillas were made out of corn and not refined flour, and they did not fry the tortillas to make chips either. They ate more beans, less meat, and more fiber as they did not use any processed or canned foods.

This does not mean you have to stop eating Mexican food if you have diabetes. Mexican food entrees including tacos, burritos, flautas, chimichangas and tostadas are wrapped in carbohydrates. One can always eat the filling with a side of corn tortillas or whole wheat tortillas, and another great option is eating a taco salad without the shell and add a small portion of corn and beans and double up on the vegetables.

Tacos are smaller and have a built in portion control so one can keep calories in check. Avoid the chorizo and fried beans which are flavored with a scoop of lard.

Avoid cheesy appetizers with chips, ground beef, sour cream and cheese as they are loaded with calories and fat. Instead go for the pico de gallo and guacamole and use vegetables instead of chips to dip.

Soups are common in Mexican cuisine and are usually made with broth, beans, chicken and shrimp. Another stew, pozole, is made with pork, vegetables and hominy, and is very filling and satisfying. Research shows that people who drank soup ate 20% less of their meal.

Fajitas are another healthy option as the meats are grilled and the tortillas are served on the side. You can replace the flour tortillas with lettuce wraps or corn tortillas or use low carb tortillas.

Mexican bowls have become very popular. One has to keep healthy options in mind and still be able to eat a tasty bowl by adding grilled meat, vegetables, small portion of brown rice or corn and a little beans and use low fat sour cream.

For those who want diabetic friendly drinks and desserts there are not many. One can always get a sugar free Margarita or mango tea. Flan can be made at home either with low sugar or just pass on dessert.

People with diabetes have many options and so don’t let diabetes stop you from enjoying a dinner out with friends or family. Hope you can make some smart and healthy choices after reading this blog.

Fat free Half and half: ¼ c