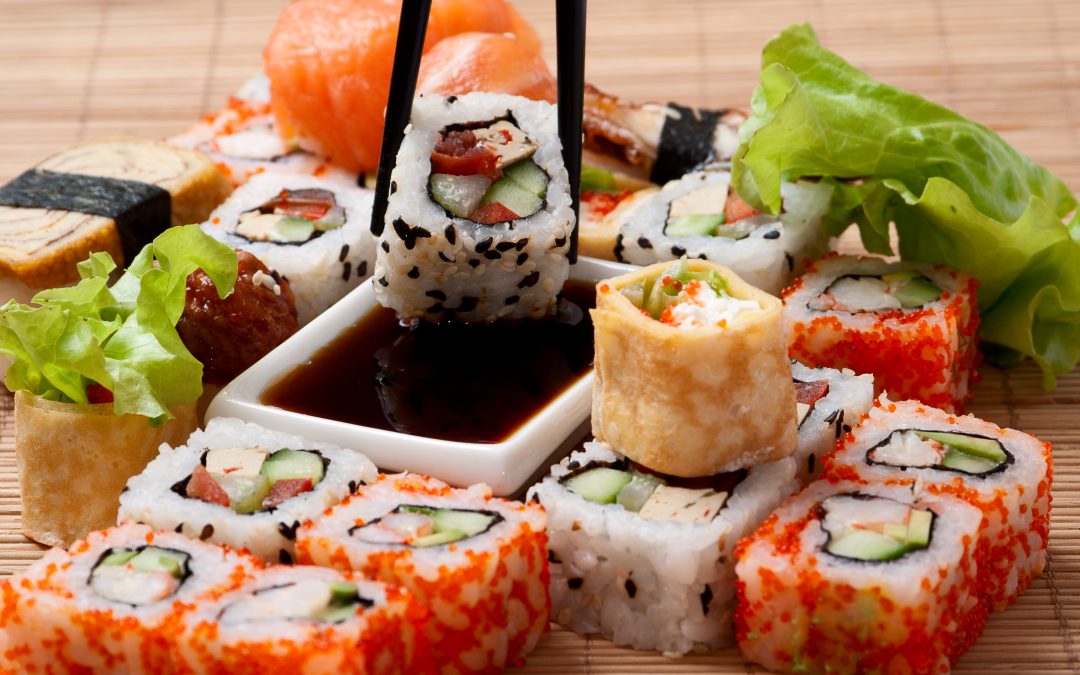 Sushi originated in China, along the Mekong River in South Asia before making its way to Japan. Sushi started out as a fermented whole fish preserved in inedible salted rice. The origins of sushi traces back to 15th century when people in the mountainous region of South Asia packed fish with rice and pressed it down with weight to preserve it. As the rice fermented, it produced lactic acid and pickled the fish. The fermentation process took a year, at which point people ate just the fish and discarded the rice.

When the idea of making sushi reached Japan, the Japanese added more weight to the rice and fish and were able to cut the fermentation time down to a month. This new process was called “Mama-nare zushi”. By the 17th century, they started adding vinegar to the rice, which cut down the processing time as no fermenting was needed, and they added more flavor to the rice. At that point people started eating both the rice and the fish. By the 19th century, sushi eating places became popular in Japan, and it was served with condiments such as pickled ginger and soy sauce.

Sushi does not have to be just raw fish. Today in America we have adapted sushi to our palates, and it continues to evolve. A good example would be to add seafood and vegetable tempura or even cream cheese and mayonnaise to satisfy the local palate. Unfortunately, such transformations, while tasty, may render the sushi to be less healthy than before.

What does all this mean to our diet? As with many foods, one has to keep in mind to eat in moderation, especially if one is trying to cut back on sodium and sugars. An eight piece spicy tuna roll can have as much as 1000 mg of sodium. This is almost half the recommended daily intake of sodium (the USDA recommends a daily intake of 2300 mg sodium per day). It also has approximately 15 grams of added sugar, which equals 3 teaspoons of sugar.

Now who eats sushi without soy sauce and pickled ginger on the side? But, sodium intake needs to be monitored especially for people with high blood pressure. 1 tablespoon of soy sauce has 920 mg of sodium and pickled ginger has 55 mg of sodium. Some rolls like California rolls and shrimp tempura rolls are also topped with masago (roe) which adds more sodium to the rolls. Other gourmet rolls like dragon rolls, which include tempura, shrimp, eel, avacado, cucumber and rice have 46 grams of carbohydrates, 1000 mg of sodium, 26 grams of fat and approximately 600 kcals. Carbohydrate intake also needs to be monitored in people with diabetes.

Some rolls include maki, which is sliced into round bite-size pieces. In a maki roll, the fish, vegetables or other ingredients are rolled up inside of seaweed (nori) and vinegar rice. The outside may be sprinkled with fish roe, sesame seeds or other ingredients. Gunkanmaki (a ball of rice that is shaped by hand with ingredients that are placed on top) have cream cheese and mayo or fried vegetables that increase fat calories.

Sushi made from raw fish can be a source or bacteria or other parasites like tapeworm and salmonella. Pregnant and lactating women should not be consuming fish that contains mercury (swordfish, shark, king mackerel and tilefish).

The American Heart Association recommends eating fish 2-3 times a week, as fish is a lean protein with omega-3 fatty acids and is considered healthy. Rolls can be wrapped in seaweed sheets, which are a good source of iron, calcium and vitamin A. It is the combination of ingredients that makes sushi healthy. California rolls with real crab meat, a tuna roll (instead of spicy tuna) and vegetable rolls with brown rice are healthier choices. Sashimi, which is thinly sliced, high quality fish served raw (not recommended for pregnant women) without rice has no carbohydrates or added sugars and a person with diabetes can eat more of it. You can always use soy sauce and pickled ginger in moderation or skip it altogether. One can complete this meal by adding a vegetable or seaweed salad on the side. You can make your own healthy sushi at home with a little practice. For those who shy away from seafood or are vegetarians, you can make rolls with vegetables.

Sushi has a lot of health benefits. The omega -3 fatty acids in sushi can help reduce chronic inflammation. Wasabi and nori, the seaweed that is used to wrap sushi, have anti-inflammatory properties as well. The omega-3 fatty acids in the fish can help maintain long term health and prevent heart diseases and stroke. Ginger is commonly served with sushi and is known to protect against respiratory viruses.

For all the sushi lovers out there, some useful hints:

– Order sushi from reputable restaurants that follow food safety standards and ask if the fish has been frozen previously.

– Fish that has been completely cooked is safe to eat.

– Do not make your own sushi with raw fish unless you can freeze the fish for more than 72 hours at 4 degrees Fahrenheit. Instead, use cooked fish or vegetables.

– For people with diabetes, fish is a great lean protein and is a good source of omega-3 fatty acids.

– Keeping blood pressure in check is very important as diabetes is strongly linked to heart problems. It is important to keep your salt in check and so eating low sodium soy sauce is advisable.

– You can save on carbohydrates by eating sashimi which is just fish without the rice and can be combined with a nice salad on the side.

– Avoid foods that are fried like “tempura” which are breaded and fried.